811A Tube History and Construction

Full line of parts, service, and repair by designer at
CTR Engineering, Inc

Occasionally AL811amplifiers (three tube versions) have been reported to
cause receiver noises, like a popping or broadband noise. In some amplifiers,
like the FL2100Z, certain tubes draw too much standby current, and with removal
of the input and output loads, this allows the amplifier to oscillate while on
standby. In the AL811 series, certain tubes with sharp cutoff characteristics
can create a noise. This noise might be faintly heard, as a muted buzzing or
clicking noise, from the rear panel area of the amplifier . The noise changes,
starting and stopping and changing rates, as BAND, PLATE, and LOAD settings are
changed. This happens only on standby. If the amplifier includes gas protection
tubes on the filaments, the gas tubes will fire on upper bands under certain
settings of TUNE and LOAD.

While there are a variety of problems due to inconsistency in production of
811 and 572 tubes, this particular problem appears to be related to the cutoff characteristics of the 811A
tubes. There are more details at this page
811A tubes . Tubes with
sharper cutoff have the problem, while tubes with more remote cutoff do not.

This is an important modification to the AL811H. This mod removes the grid
resistors and bypass capacitors, and directly grounds the grids.

In addition two gas voltage clamps, GT1 and GT2, are added. These are 125-150
volt clamps. I have them available for $10 including shipping.

Since the AL811H amplifier was initially designed, vacuum tube construction
has become less reliable. Tubes these days have much more tendency to arc from
anode to grid.

This modification improves reliability of the amplifier by directly grounding
grids. Amplifiers produced after early in year of 2011 have this modification. If your amplifier
has resistors mounted on terminal strips near the tube, it could use this mod. 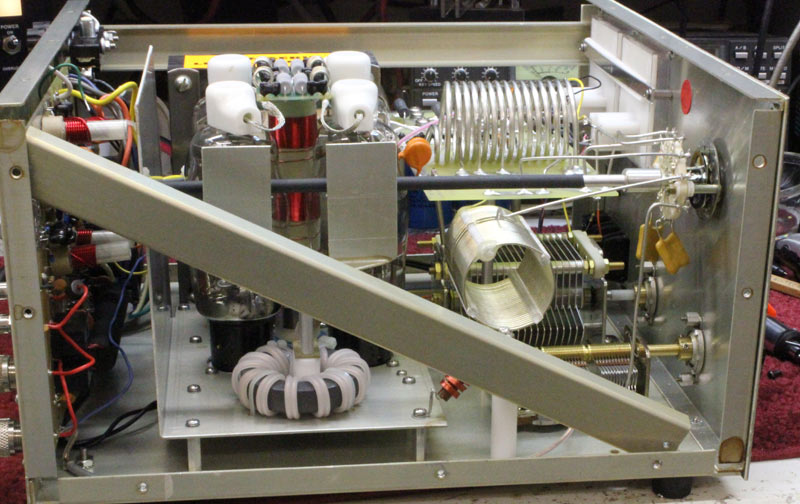 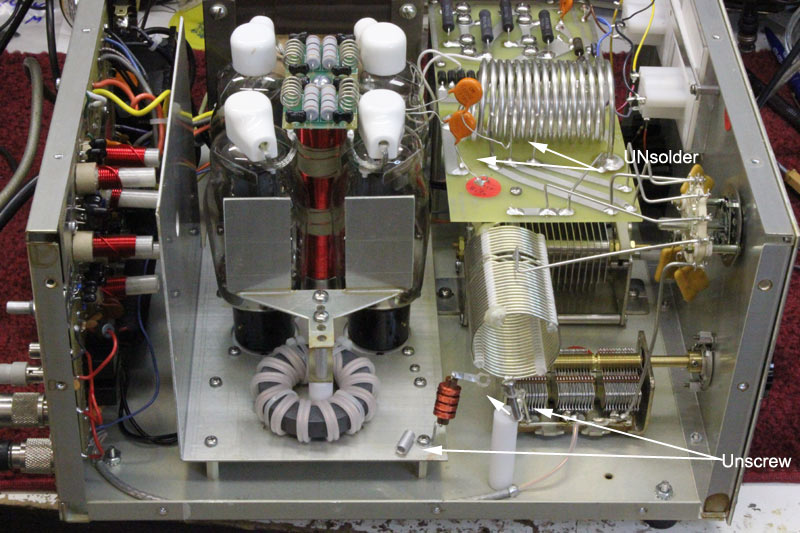 Remove screw that holds RF choke lug to LF tank coil. Be careful to not knick
or cut the fine insulated wire in the choke winding! 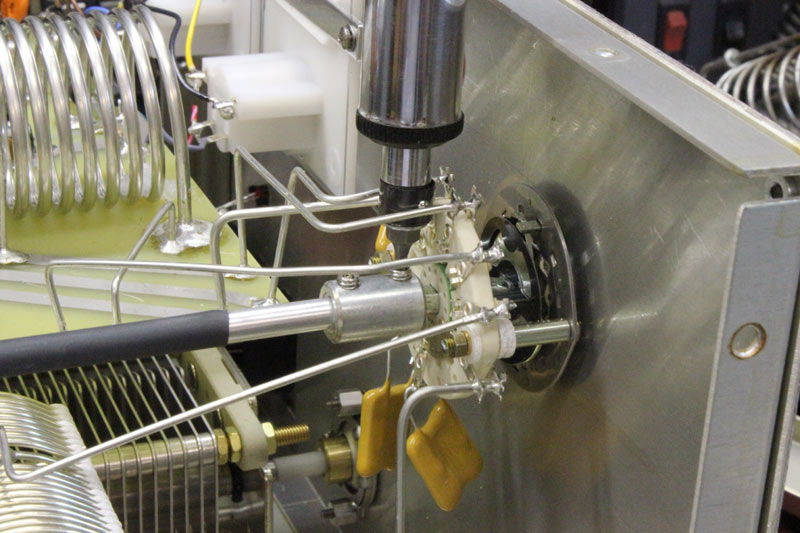 Loosen the FRONT setscrew only. 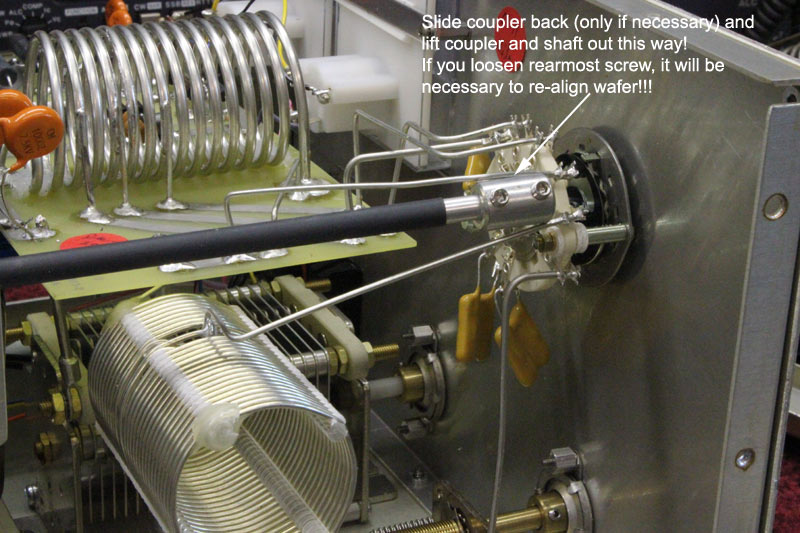 Slide the shaft coupler back off the switch.

If the switch is out of alignment,
see this page 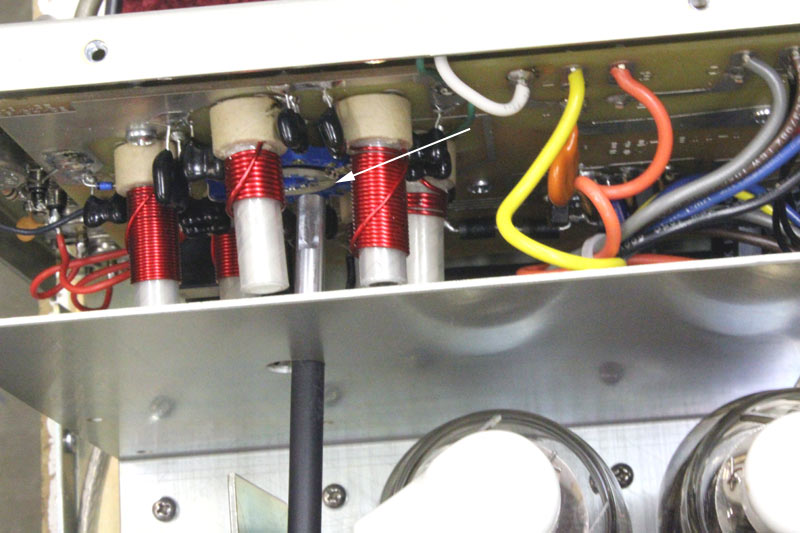 Slide the shaft forward to remove from the input circuit bandswitch. Be careful
with this switch. It can be damaged and changing it is a real pain. 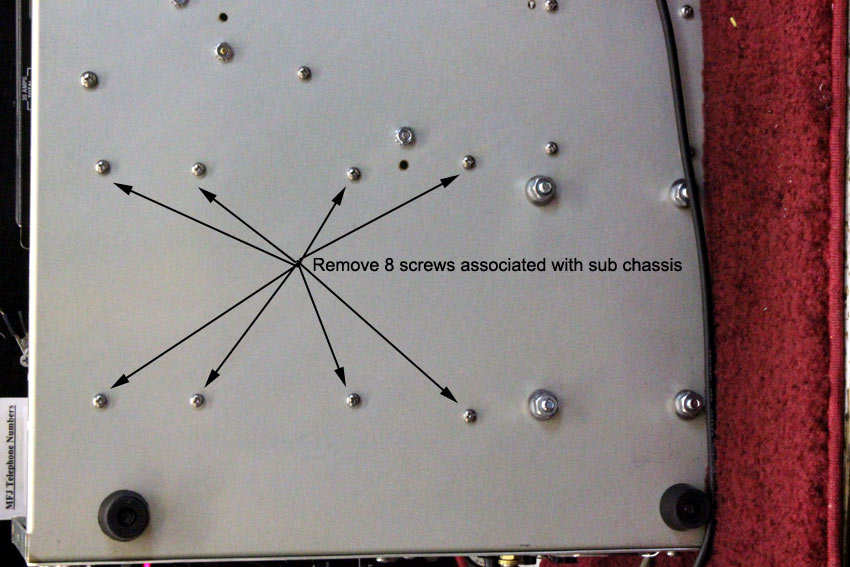 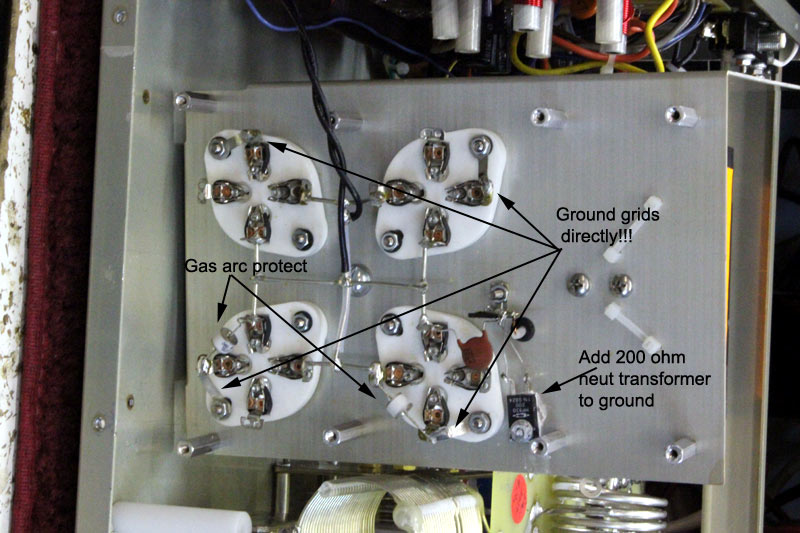 The 200-ohm non-inductive 25 watt resistor is fully across the neutralizing
transformer, from the .01 uF capacitor to ground. This resistor is less critical
in the AL811H. It slightly increases drive power requirements to more closely match
the AL811H to 100-watt radios. However, it also improves stability with some
Chinese tubes. I strongly suggest using it.

Warning!!
THIS
MODIFICATION IS MANDITORY IN THE AL811! In the AL811, there is no
neutralizing transformer. The .01uF disc capacitor must be added. It can connect
to any filament pin. It goes through the resistor to ground with short leads. 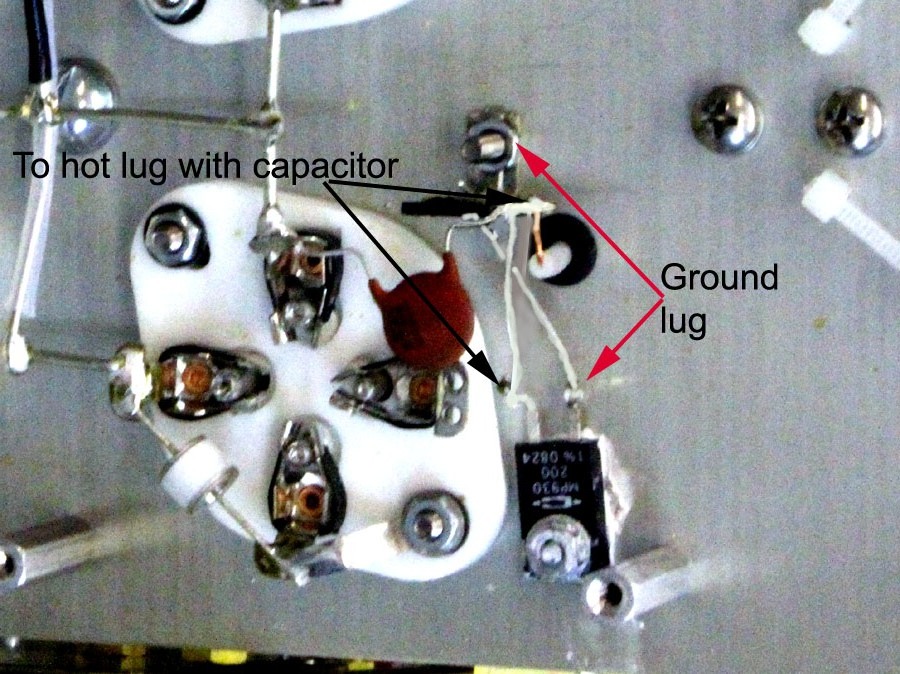 The 200 ohm resistor connects across the neutralization transformer
winding feedpoint to ground in the AL811H.

In the AL811, the resistor connects from filament through a .01 uF 1kV to
ground.