The typical automotive alternator behaves like a constant
voltage source.  This means the alternator output post tries to maintain a
certain voltage independently of shaft speed or electrical load. The constant
voltage characteristic is necessary to force the battery to full charge as
rapidly as possible without damaging or unduly stressing the battery. This also
ensure electrical components, such as incandescent lights or semiconductors,
operate at acceptable voltages.

The key to this ideal behavior is actually the voltage
regulator and how the voltage regulator is connected into the system. Of course
the alternator has to turn at a normal operating speed, which is set by pulley
ratio and engine speed range, but the regulator remains key to stable running
voltage as the load changes.

Horsepower demand from the engine, ignoring modest changes in
electrical performance and frictional losses with shaft speed, is dependent on
alternator electrical load.

Within limits of normal operating speeds, the electrical load
determines the horsepower load, not the shaft speed. If the shaft
is slowed too much, the regulator falls out and the voltage drops. While this
reduces shaft or belt loading, it only reduces shaft loading at idle!! While
running slow enough to reduce horsepower demand, the battery discharges. This
means when you rev the engine up, the alternator loads the belts extra hard to
charge the battery. Using an under drive pulley set (smaller crank or larger
alternator pulley) actually costs horsepower when racing!

The proper way to set alternator speed is to find the maximum
safe alternator speed, and set the pulley ratio so the alternator never goes
above that speed at maximum RPM. Let’s do an example case or two. These are just
examples to show the math using completely fictitious numbers:

Pulley ratio is just the ratio of pulley diameters.

How the Alternator Works

This is a basic description.

An alternator has a rotating electromagnet with many poles,
and several other stationary outer windings. The center winding, called an
armature, field winding, or rotor, is excited through a carbon brush contacting
the slip rings.

The mechanical movement of the rotor changes strength and
polarity of the magnetic field in the stationary winding used to generate
electricity. This causes the stationary windings to produce an alternating
current voltage. That voltage is converted to almost pure direct current by
large diodes. A stronger magnetic field and faster movement produces more
voltage, and also makes more current and power available.

Without regulation, the voltage produced would be proportional
to speed and field levels, and inversely proportional to electrical load. As a
matter of fact, if you were to disable the regulator or abruptly reduce the
electrical load, voltage of a 12 volt alternator can reach hundreds of volts!
I’ve successfully operated 100-150 volt devices directly from a modified 12 volt
alternator.

The regulator has an internal precision voltage reference.

When the regulator detects excessive voltage, the regulator
removes field current. This reduces load on the belts, and reduces alternator
voltage and available electrical load power.

This feedback system renders under drive alternator pulleys
useless for reducing engine load. If you slow the armature, the regulator
immediately turns up the field power. When field power increases the shaft
becomes harder to turn, with the load on the crankshaft eventually returning to
exactly the same level as before the under drive pulleys. The exception to this
is if the shaft turns so slow the alternator cannot keep up, in which case you
will either have to upgrade the alternator or suffer with low battery charge.
This change will result in more load at higher RPM, meaning less engine power at
high engine speeds as the battery recovers lost charge.

If a car is heavily modified in a way that drastically
increases peak current demand, alternator demand can exceed factory alternator
limits. Sometime an alternator has to be relocated to allow installation of
power adders, like turbochargers or superchargers. I installed an electric fan,
electric water pump, and an intercooler pump. Because the car needed to recharge
the battery in short run periods, and because demand increased, I upgraded from
a 65 ampere to a 130 ampere alternator. I also used the fastest alternator
pulley safe for the alternator.

I hand fabricated brackets that offer very rigid support in my
alternator relocation: 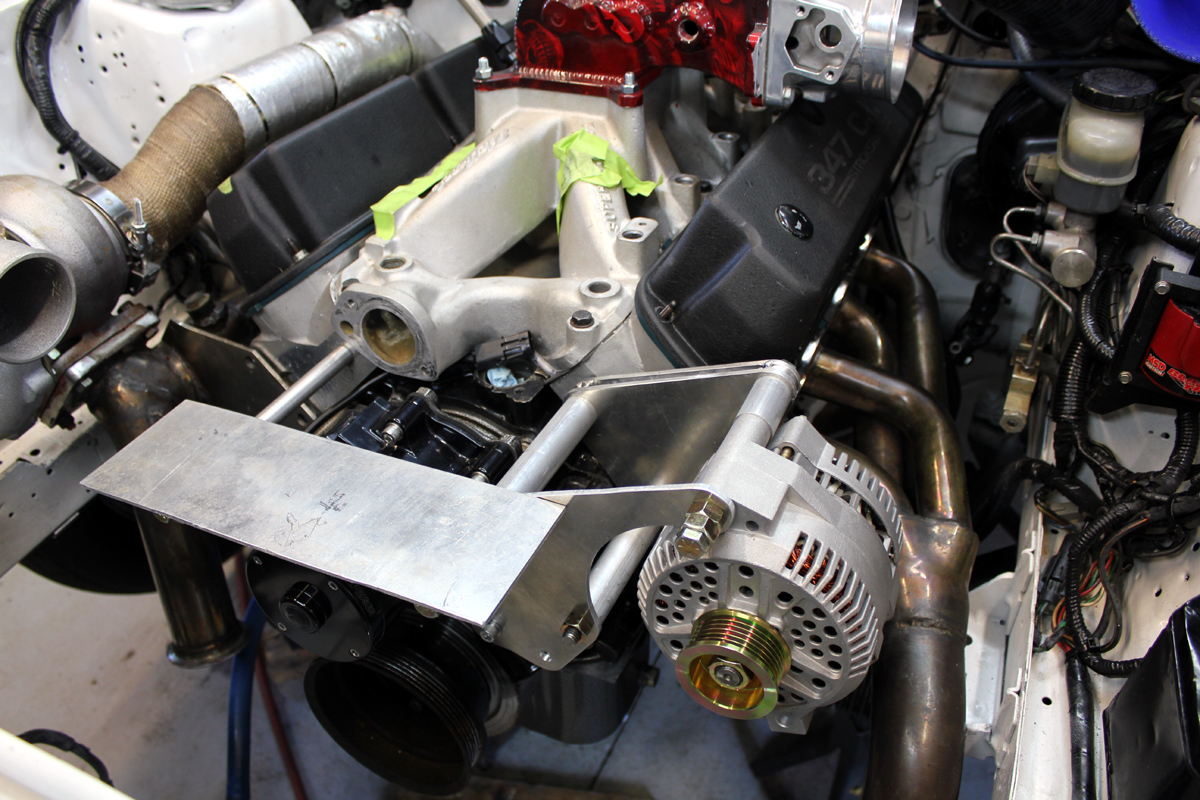 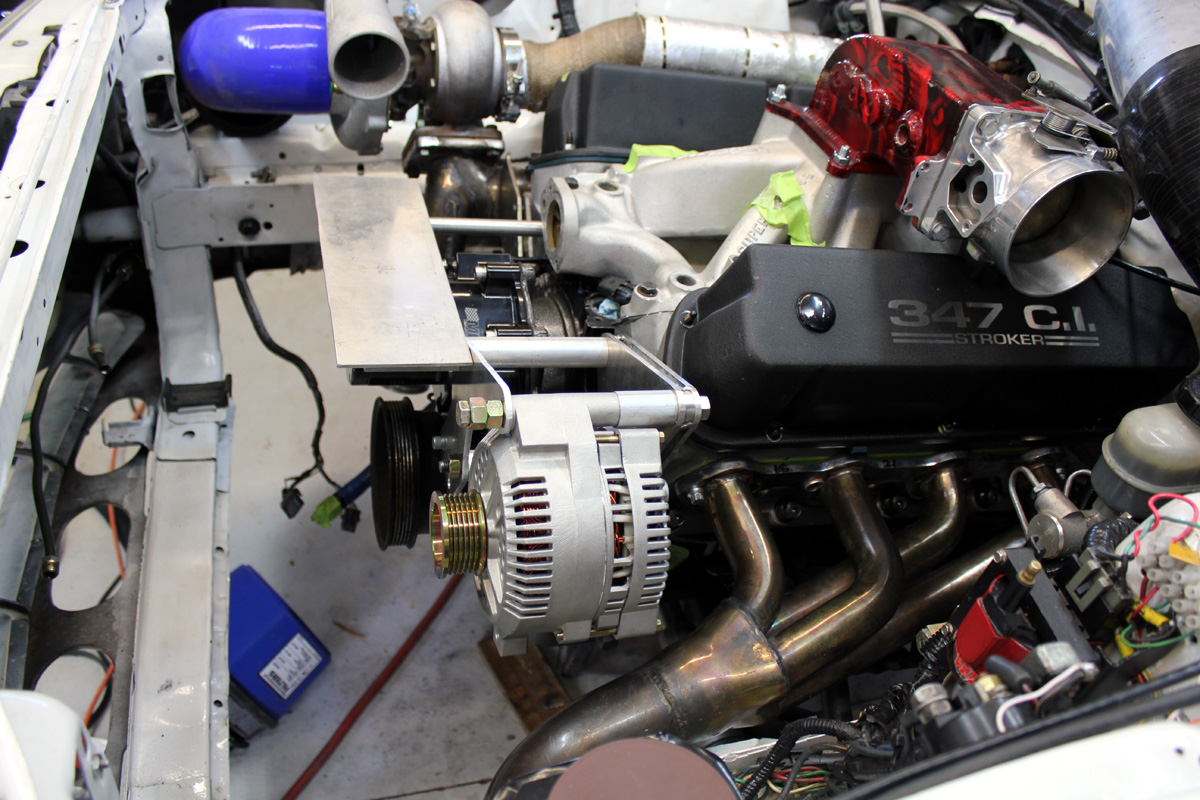 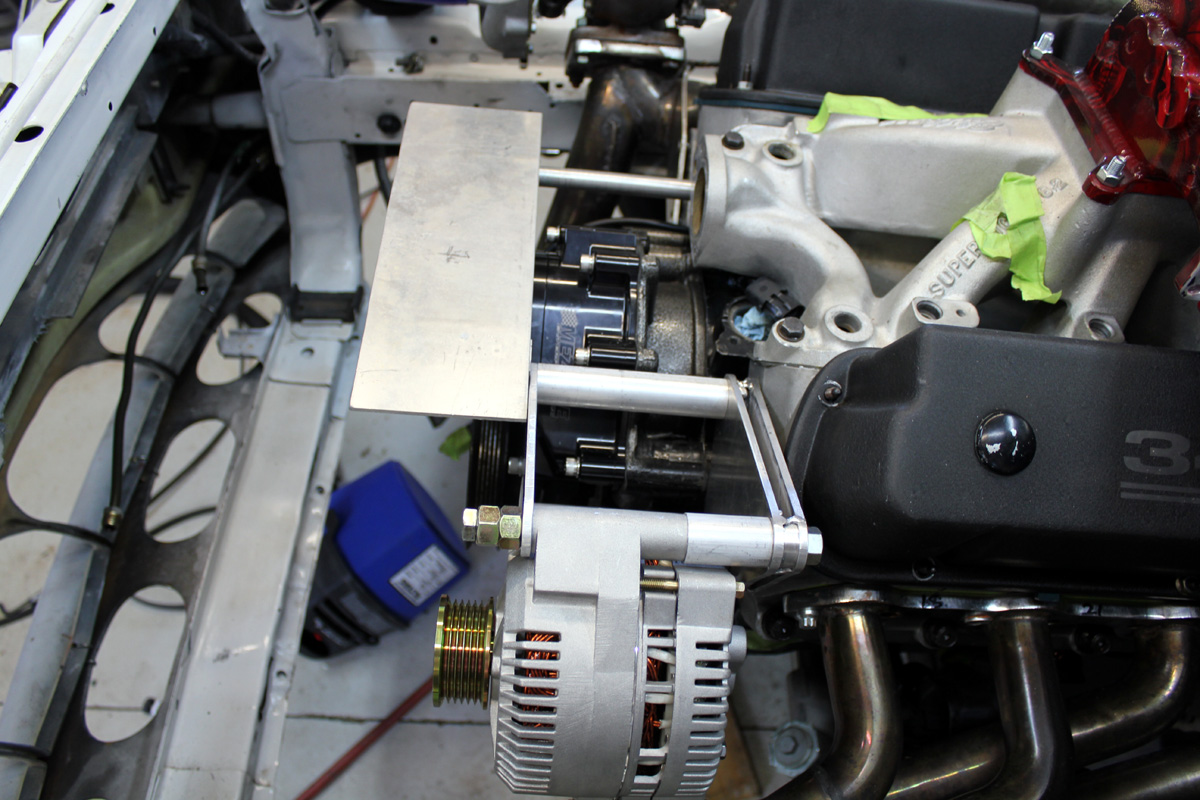